ⓘ Want $10 worth of Bitcoin for free? use this link -->> Coinbase to get your free crypto wallet.

As the human race technologically progresses and with the state of the current climate any advancement needs to be sustainable and energy efficient. Since blockchain is a major new player in the development of ledger technology (Banking), AI, Internet Identity and DNS, Infrastructure Security, Education and anything else to do with decentralization, any product that aims to achieve adoption must also adhere to this caveat.

Therefor, its fair to say that with its current energy consumption Bitcoin is just not going to cut it. For example:

Back in 2018, It was proposed that Bitcoin's power usage equaled that of Ireland's usage for the whole year:

Alex de Vries, a bitcoin specialist at PwC, estimates that the current global power consumption for the servers that run bitcoin’s software is a minimum of 2.55 gigawatts (GW), which amounts to energy consumption of 22 terawatt-hours (TWh) per year, almost the same as the country of Ireland [1].

Just one year later, as depicted by the image below from the research taken by the Cambridge Centre of Alternative Finance[2] the energy consumption of Bitcoin is more than Switzerland, or Czechia:

That is a staggering 41.78 terawatt-hours (TWh) increase in just 1 year. To become the next world wide financial solution, this needs to drastically improve.

How efficient are the current financial infrastructures?

Lets have a comparison, the two biggest payment networks in terms of adoption and transactions processed today are VISA and MasterCard.

VISA stated in their corporate responsibility and sustainability report in 2017 that the company as a total for all operations globally consumed 680,560 GigaJoules[3]. If we calculate that against the 111.2 billion transactions that we know VISA processed[4] then we can determine the VISA ECPT (Energy Consumption Per Transaction) is 0.0017 kilowatt-hours. This is slightly off as unlike MasterCards report below VISA reports the whole companies energy. VISA data centers continued to represent 54 percent of the total consumption of electricity[3]. So with this we can calculate that VISA data centers consume 91.8 kWh per 100,000 transactions.

How much energy does IOTA consume?

Now let's take a look at how energy efficient IOTA is. Based on the research[6] done by: Amir Abbaszadeh Sori, a PHD Student and IOTA Ecosystem Researcher the average ECPT for an IOTA Transaction was an impressively low 0.11 WH

The experiment involved testing the IOTA PoW’s Energy Consumption on three types of the mid-range smart phones with different processors and Android versions. Each test involved sending an iota token 25 times respectively with each device. This measurement means:

The results of this experiment can be seen in the image of the comparison table below:

From the data we collected (as summarized in the chart below) we can see that the IOTA energy consumption beats the two top payment networks out there and this is what makes it a viable solution for the next de-facto payment network for the world and the future advancement of the (IoT) Internet of Things. 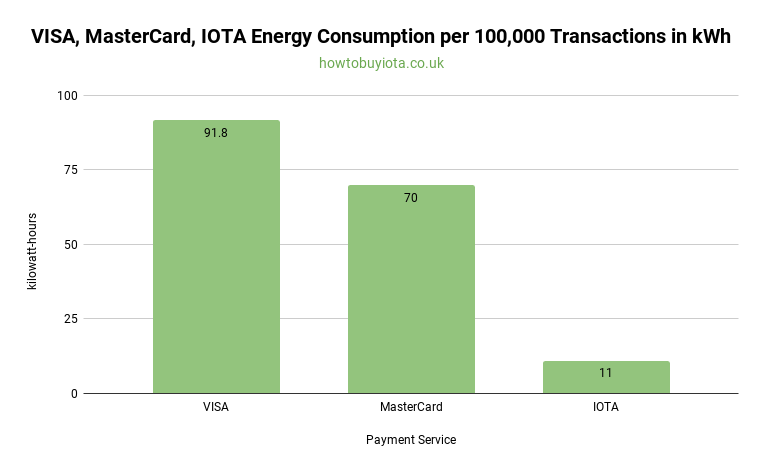 For those interested, the best way to support the IOTA Foundation is to buy iota and become an early investor. The more the network is used, supported and promoted the sooner we can start using a more sustainable and better for the planet payment system.

How to buy IOTA in other countries:

Currently, we are working with translators to make this buying iota guide available in many countries, at the moment, please visit